Dash is a departure from the dual cowl design which is iconic for Mustangs. Shame they couldn't integrate that screen into the classic design

If the middle part was black like the current gen it would probably look better. I wonder if that will be an option or not.

I'm the opposite. Rear looks nice, maybe a bit more polished than the current model. The front looks...frumpy for some reason. 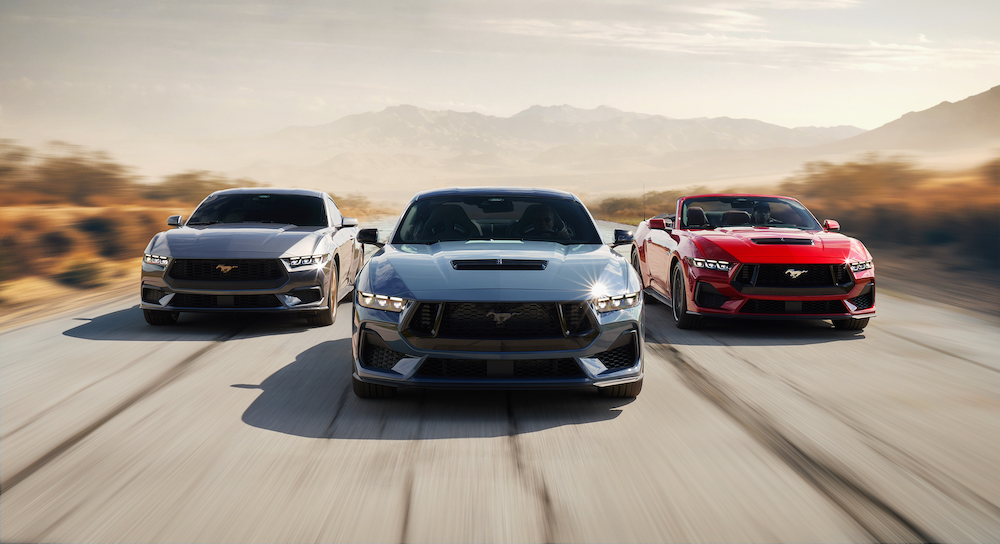 According to Lethal Performance:

Grabbed this from the cars sub on reddit. Apparently this was on themustangsource.com and got taken down

The S650 Ford Mustang can still be had with V8 power and a manual, but features some seriously modern tech.

We’ve been waiting what seems like forever to see the all-new, S650 Ford Mustang in the flesh, an elongated period of time that’s been filled with rumors, speculation, and leaks. Now, the seventh-generation pony car’s time has finally arrived, and there’s a lot to dissect here, as the S650 Ford Mustang represents a natural evolution of the S550, albeit with fresh styling, a totally new interior, more power, and some seriously cool tech toys.


On the outside, the new car has been treated to some edgier, more modern styling that still screams “Mustang,” with some heritage-inspired features such as the upper grille design, which hearkens back to the 1960s models. Familiar elements like tri-bar headlights and taillights and a long hood with a short rear deck remain, while both EcoBoost and GT models receive their own unique styling features to help differentiate the lineup.


A grand total of 11 exterior color options are available, along with new stripe colors and designs, three different Brembo brake caliper colors, and a range of new 17-, 19-, and 20-inch wheel designs. The new Mustang Design Series allows owners to further customize their rides, while both EcoBoost and GT models are available with an optional Performance Pack.


Meanwhile, the interior of the S650 Ford Mustang has been treated to some radical changes that aim to make it look and feel like the ****pit of a fighter jet, with a 12.4-inch instrument cluster and 13.2-inch infotainment screen that are based on the same Unreal Engine 3D creation tool as modern-day video games. Both screens can be optionally configured to flow together behind a single piece of glass for a truly futuristic look, to boot.


Those cool features continue with the addition of Remote Rev, which allows owners to rev the engine remotely using the key fob, as well as a new Electronic Drift Brake that makes it easy to get sideways. Owners will likely want to do that a lot, as the new Mustang GT will reportedly feature the most powerful N/A version of Ford’s 5.0-liter Coyote V8 to date – the fourth-generation unit, which utilizes dual throttle bodies and a dual air intake box, though the automaker isn’t talking numbers just yet.


The GT will still continue to be offered with a six-speed manual or 10-speed automatic transmission, and the 2.3-liter EcoBoost I-4 will still serve as the base engine for the new pony car. As for availability, the S650 is set to go on sale in the U.S. next summer, though pricing won’t be announced until we get closer to launch. However, at least for now, the big news here is the Mustang will live on for at least one more generation in its current form, which is fantastic news for pony car fans everywhere.
Click to expand...

Joined Aug 27, 2012
·
2,799 Posts
Well, I didn't care for the 6G initially so hopefully this grows on me. It's obviously more of a heavy refresh than it is a next gen car which isn't a bad thing I guess... It's clearly better than that 7G Camaro!

FenwickHockey65 said:
I'm the opposite. Rear looks nice, maybe a bit more polished than the current model. The front looks...frumpy for some reason.
Click to expand...

I see what you're saying. I just like the new angular front, specifically the car on the left without the hood inlet.

Andrew L said:
Dash is a departure from the dual cowl design which is iconic for Mustangs. Shame they couldn't integrate that screen into the classic design
Click to expand...

Agreed. I like the placement of the A/C vents on the current model. The dash has too much gray plastic, which was the complaint of GM cars in the 90's and 00's.

Happy that the styling is evolutionary

tripowergto Jan2003 said:
They were quick to copy GM's new dash approach but it is a big improvement inside.
Click to expand...

tripowergto Jan2003 said:
They were quick to copy GM's new dash approach but it is a big improvement inside.
Click to expand...

They're making it more like a Camaro, so you would like that. I have a Mustang, so I don't. Surprise, surprise.

Joined Feb 21, 2015
·
23 Posts
I think it looks pretty good, and I see a bit of G6 Camaro from the overhead front 3/4 view. Such a big improvement over the previous Mustangs dash. Really am hoping for a G7 Camaro.
B

Joined Aug 7, 2005
·
3,221 Posts
Looks really good, definitely has more visual flourish this time. Love the creased rear-end design and crisp fender lines. It does look a bit like the Camaro out back. The rest of it is pretty distinctive to Mustang, absolutely love those headlights!

Dashboard is hardly a GM thing, Hyundai and Mercedes were doing this before GM.

Joined May 12, 2010
·
4,464 Posts
I kind of like it, looks more modern. Need tos see better pics and/or in person. The interior needed a bit of "updating". Updated Coyote sounds like a Beast!
L

2020 Chevrolet Equinox LT AWD
Joined Dec 29, 2012
·
15,237 Posts
Like some people, it's got a nice butt. The front is a little weird from some angles-gotta see it in person, and I hate that instrument panel but.... it's the trend and way of the world so we gotta live with 'em I guess(ain't as bad as other stuff though).
1 - 20 of 118 Posts
About this Discussion
117 Replies
38 Participants
Last post:
jpd80 15 h ago
GM Inside News Forum
A forum community dedicated to GM owners and enthusiasts. Come join the discussion about General Motors news, concepts, releases, classifieds, troubleshooting, maintenance, and more!
Full Forum Listing
Explore Our Forums
Automotive Industry & GM News General Car Lounge Global Chevrolet News Competition News Global Cadillac News
Recommended Communities