bmwboy2007 said:
Corvair when unveiled created a firestorm of public interest. It was a truly revolutionary vehicle at the time.

It was only the very dated Mustang, (albeit with spicy sheet metal) that toppled Corvair as the 'it' car for everyone.
Click to expand...

How in any way was the Corvair “truly revolutionary”?

Other than perhaps to within GM itself. Although yes its styling was highly influential and widely copied.

But essentially Corvair is just a recycled pre-war Volkswagen on steroids.

Nor did the Mustang prove to be “very dated”.

Whereas Corvair’s rear-engine represents a definitive design dead-end; dated, doomed and dead within a decade.
N

Supposedly “dated” Falcon underpinnings proved to be the modern formula for sales success, then and future. And btw evolving onward for 65 years! 105” wb to 121”

Rear engined, air-cooled Corvair? Not so much success ahead for those dated swing-axle underpinnings.
N

09W said:
The 1st Corvair definitely was revolutionary. It opened the USDM market to a high volume small car where there wasn't one prior-to. And it gained considerable traction in Europe as well. It was FAR from being a "recycled VW".
Click to expand...

To claim the Beetle wasn’t a high-volume small car, or that it wasn’t sold in America, is selectively playing semantics.

Volkswagen were already selling six figures in Corvair’s debut year, just within your USDM. And Beetle sales just kept growing, and growing, and... you guessed it.

Which explains why, out of Falcon, Valiant, Lark, Rambler (plus Holden, Zephyr, etc etc) it was only Corvair which spontaneously opted into that rear-engined design pit.

09W said:
The 1st Corvair definitely was revolutionary. It opened the USDM market to a high volume small car where there wasn't one prior-to.
Click to expand...

“Not one prior to” - implying the then USDM 100,000 unit p/annum VW was not already a high volume small car?

09W said:
As for your claimed "claim" - I never stated the beetle wasn't selling well, so who's semantics were you referring to?
Click to expand...

09W said:
Oh, and you forgot the renault caravelle - another rear-engined small car "from the pit" that only lasted 10 years.
Click to expand...

Thanks for further proving my point!

09W said:
Again- as I clarified; opened the segment up to DOMESTIC buyers.
Click to expand...

Clarfied as DOMESTIC buyers, or buyers of DOMESTIC cars? Please use accurate English.

Your statement was that the Corvair was "the only" one - it wasn't.
Click to expand...

Which part of my “flat engine, air-cooled” stipulation do you not understand?
N

Neanderthal said:
Whoever sent this puppy out with the original rear suspension was a total maroon. I was driving my cousin's earlier Corvair to work, she was shotgun. I cooked into a turn too fast, the rear suspension tucked under, the ass end started to come around. Fortunately a quick jerk of the wheel brought Mr. Corvair back into compliance with living another day. But I wouldn't have one. Insane.

Interesting idea. But deadly in the wrong hands.
Click to expand...

RedSkyBlackDream said:
What in the ham sandwich are these pictures! Is this real?! 😳
Click to expand...

The wheels develop massive camber change under load as those swing-axles ‘tuck under’ which, as you see, dramatically narrows the track causing the rear to ‘climb up’ - like the proverbial stink bug in heat - a potentially deadly ‘worst of the worst’ drama combination!

The next step is either very sudden snap-oversteer, and then in extremis the massive camber change will induce the tyre sidewall to partially collapse, as it now carries all the load - witness the nightmare 3rd photo of that Spitfire Mkll which appears very close..

This leads the outside edge of the wheel rim to literally dig-in to the pavement (or in combination), may also blow out the tyre.

And when that happens, my friend, you are dead-set cactus!

You can clearly imagine what happens next...

Mate I’ve got an old UK magazine somewhere which featured an in-period Family Car Test Comparison of four different vehicle Brands, with each vehicle employing the dreaded swing-axles. There’s a 2-page spread entirely devoted to photos of each vehicle while cornering... as doom fast approaches. It’s a jaw dropper for sure

Btw I used to own a 1955 Beetle Standard (the base-model ‘stripper’) which was equipped with this thrilling combination:

So basically, in a superbly choreographed coup de gras, if the swing-axles didn’t kill you 💀 the subsequent rollover inversion meant you’d surely burn to death 🔥
N

This is me and my dad in rear of my uncle's Caravelle in 1960. I remember being impressed with the frunk and the removable hardtop!

That’s a cool photo Rocky, thanks for sharing.

Floride was back in the day regarded as a bit of a looker with its neoveau design theme; very clean and minimalist.

Btw whenever I see a Tesla M3 I can’t help associating its front end design to the pretty Floride, along with the widespread disapproval of the grille-less M3

Btw speaking of grilles, or lack of them, you may recall that Renault actually tried to sue BMC due to what the former perceived as a more-than-coincidental design similarity between its Floride front-end to the later MGB.

If you look at the two, the resemblance (sans the chromey MGB grille) is, shall we say, uncanny..
N

AWHoden said:
Mmmm, yes and no.... The tire pressures were set the way they were to increase the stability of the car, putting the onus on the driver to ensure they were set to specs. Gas stations just pumped them all up to the same pressure, which worked with the swing arm rear axles to decrease stability. They were no more dangerous than any other car back then.
Click to expand...

Which was then presented and sold to the general public by the world’s biggest corporation as a ‘general good’ family car, often as first-car. In other words, aimed to both the great unwashed and the inexperienced.

Just one look at those previously posted swing-axle Triumph photos speaks for itself. And if not..

eaton53 said:
Saw a 1987 Porsche 911 "Widowmaker" Turbo sell on Mecum last week.
I hope the buyer knew what they were getting into.
Maybe it'll just sit safe n sound in a nice big climate-controlled storage building...
Click to expand...

09W said:
I made this lil comparison pic 4 years ago:
Click to expand...

I made this one just now 😉 thanks

AWHoden said:
Photos of tires displaying excessive camber don't mean the car was dangerous. The video of that yellow one showed the driver repeatedly trying to make it lose control....and it never did.
Click to expand...

The video of that yellow one showed an expert race driver in perfect conditions attempting to control oversteer slides on a vast, completely flat, deserted airfield. Nothing more, nothing less.


It also illustrates what a dogged oversteerer these swing-axle Corvairs are.

I am thinking that last photo was doctored by someone,
Click to expand...

Was my post #21 similarly doctored?
Is there an anti swing-axle conspiracy do you think.

That last photo (the green car) belongs to the actual Hagerty article you cited, lol. See link below. 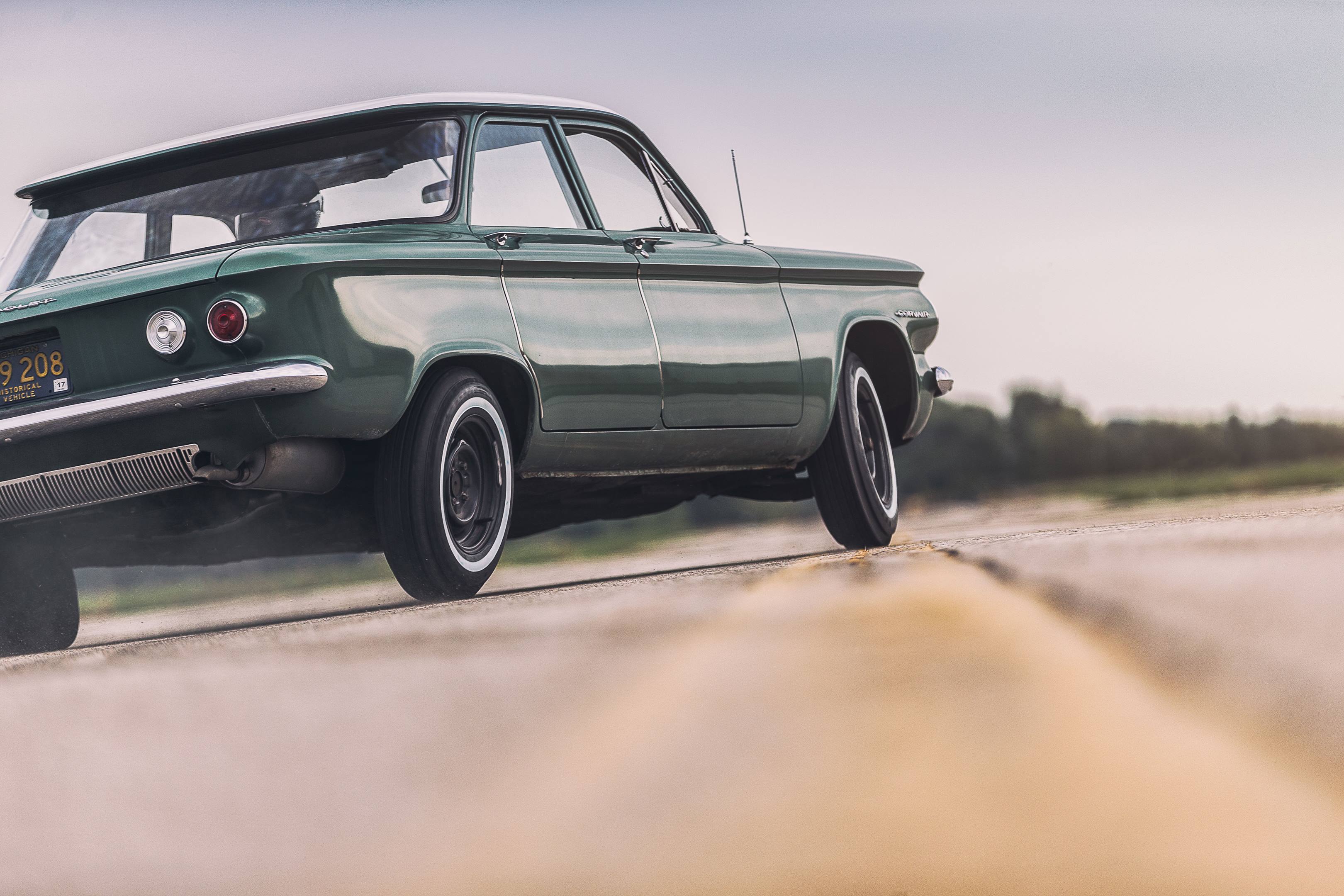 Will the Corvair kill you?

If automotive-safety advocate Ralph Nader is right, what I’m about do has an uncomfortably high percentage of ending in disaster. I’m in a 1960 Chevrolet Corvair, one with a manual transmission and just 39,672 miles on the clock. An expanse of wide concrete runway — a portion of Detroit’s...

if the left front corner is in full compression, the left rear corner would be compressed as well, but it looks as though it is extended.
Click to expand...

With respect, suggest you explore ‘roll centre’ and its affect on vehicle dynamics.

Btw the Corvair poor reputation was not about rollovers, that is your parameter.

It’s about directional stability and loss of control. And, basically, if you prefer your wife or teenage daughter to leave the roadway forwards, or backwards.

Yes, The Chevrolet Corvair Really Was a Handful to Drive

"To avoid spinning the car, I have to counter-steer almost immediately after initiating the turn.... That was Nader’s point: The average driver wasn’t equipped to handle an over-steering car."

The problem was the general public didn't adhere to the recommended tire pressures.... drivers were not used to the rear weight bias and pendulum effect of the rear engine.... Crash statistics from that era reveal that it had a comparable rollover rate... Porsche has no trouble selling a rear engine car these days... - the handling was definitely fixed considering they raced it successfully..
Click to expand...

When desperate, always blame the victim. Instead fudge the issue by trying to equate a high end exotic sports car to a low end ‘general good’ family car. Because 09W endorses your view
N

09W said:
Wonder if Nadar even bothered to drive a Corvair.
Click to expand...

Another one who freely comments on something he didn’t bother to view.

And your going to the trouble to misspell Ralph’s name says more about the former, than the latter
N

· Registered
Joined 12 mo ago
·
762 Posts
It’s easy to flip any car. Just witness all those pit manoeuvres gone wrong. Or for example you could lose the tail on your low squat GM sedan, get it sideways then clip something..
N

09W said:
And yet, that still doesn't answer my question, does it? Oooo.
I've owned vehicles I've never driven, too. Oooo.
Click to expand...

Yes the odds are Nader never once bothered to drive the car he had based his entire professional career on, which he also had access to because he personally owned one.