I'm indifferent on the update since I actually like the current design, but I'm surprised to see a more upscale exterior treatment with body-colored cladding and elaborate lighting. I thought for sure Ford was going to just cost cut this thing on its way out. But there is a risk that this is the Chinese version, which looks very similar to this already. But I don't see the mandatory Chinese front license plate bracket which is always the giveaway, so I suspect this is ours. We'll find out soon since the debut is near. With Edge departing, it's possible they might reposition the Escape to fill its shoes somewhat, but I doubt it. 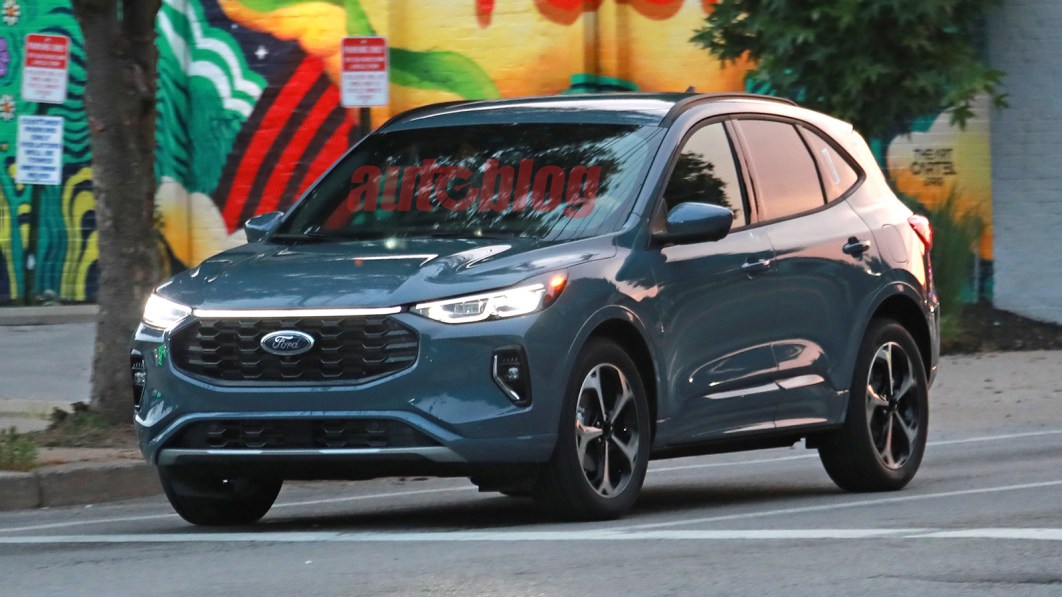 2023 Ford Escape small SUV caught in spy photos completely uncovered. It has a new fascia based on the Mustang Mach-E and other recent Fords.

Joined Aug 7, 2005
·
3,066 Posts
My Mother has a loaded 2020 Escape and I love the thing, just needs some more upscaling and I think it's a great Edge replacement really. Interior flexibility is amazing.
B

Joined Aug 7, 2005
·
3,066 Posts
I don't know what's going on with the interior besides Sync 4 which is very overdue to arrive on C2 cars. I'm hoping we see the combined screen design in Escape like we are going to see in some 2024 Fords that will be running enhanced CarPlay, but it might be too early for that.

I actually like the interior of the Escape, at least in the Titanium model. It's clean, sturdy, honestly designed and spacious. The previous design looked more interesting maybe, but it felt crowded and creaky. Global Fords tend to be Germanic in that way, Escape is the only one like it left in the US.

The Light-bar is probably a bit out of place here, but it's also very common in Chinese car design. So either this is the Chinese version, or we get to benefit from Chinese design trends.
B

jpd80 said:
The update will do exactly what Ford wants, nothing.

I think they have Escape firmly in the departure lounge, maybe three or four years time when it’s been trashed and decontented like they did to Fusion. All the love is going to Maverick and Bronco Sport.

Maybe a replacement is coming for Louisville sooner than the proposed balance out of Escape in 2026…
Click to expand...

My theory is that they will shutter Louisville and move the workers to the nearby Blue Oval City or Kansas City plants. Lincoln will get a Corsair EV out of Oakville but Ford will not get an Escape EV. With Model Y significantly outselling the Escape, you see where this is heading...if commodity prices ever come back in-line anyway, Mach E or its successor will cover ground from Escape and Edge...ovelapping with Explorer EV and Explorer ICE while Maverick and Bronco Sport hold down the affordable (but not commoditized) ICE customers. To me it all makes perfect sense by end of decade, maybe less sense at the moment.

Escape/Kuga is still an important global product and will likely live on in China like Edge and Mondeo, but once the US and EU electrify their highest volume segment, it's time will be up. Like sedans, the compact crossover has been commoditized to the point it's a waste of factory floor space if you can do something more growth/profit oriented with those resources.

As for Android Automotive in Escape, I know it's been delayed, so I'm unclear on how that effects their launch in Escape. But you have to remember it's an OS, Ford ports Sync over to it. We'll see, I'm not clear on what's happening there at this point, and I've been surprised by the whole enhanced CarPlay announcement, but it explains the hardware design we are getting.